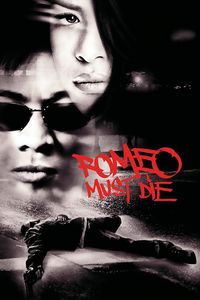 (In theaters, March 2000) American filmmakers won’t manage to produce good martial arts film unless they understand that the attractiveness of these films’ fight sequences lies in the fight choreography. It is far more impressive to see thirty uninterrupted, uncut seconds of hand-to-hand fighting than to see thirty second’s worth of one-seconds cuts. One is easy and falsely exciting; the other is damnably hard to do, but awe-inspiring. That, in a nutshell is one of this action aficionado’s main problem with Romeo Must Die; it’s not up to Jet Li’s talent. The other problem lies in the mortally slow pacing, which sucks the energy out of the film. Fortunately, Jet Li rocks when he’s allowed to, and Aaliyah is a true-and-true dreamgirl. (Plus, Françoise Yip has a good cameo) At least the film is wonderfully pleasant in its matter-of-fact multicultural attitude. Worth your time if you’re an Hong Kong action film fan, but otherwise… this ain’t Romeo And Juliet.