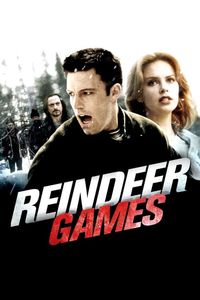 (On VHS, July 2001) Ben Affleck doesn’t work as an action hero. Nope. Not a bit. Alas, he doesn’t even come close to being Reindeer Games‘s weakest link. Oh, the film starts well enough, with ominous shots of dead Santas strewn around a casino. But then we’re in full “three days earlier” mode, bidding our time to see how we’ll end up with a truckful of said dead Santas. That’s when we meet our oh-so-bland Ben, trying to act his best in the requisite not-too-bad criminal role. (He’s just a car thief, not a murderer. Just wait, though.) In a few minutes, his partner is killed, he’s doing the nasty with Charlize Theron and a bearded Gary Sinise appears, putting a shotgun to his neck. Or is everything as it seems? Yes, Reindeer Games is another one of those preposterous thrillers whose twists and turns are thrown at the viewers just for the sake of keeping them awake, not out of any great story consistency. Watch the film again and you won’t find any foreshadowing whatsoever. (Unlike “good” twists films, like The Sixth Sense and Fight Club, when the clues are obvious once placed in context.) John Frankenheimer, who’s wasting his time with ordinary straight-to-video stories such as this one, directs all of it featurelessly. Charlize Theron is cute, but her nude scenes will quickly remind you that her best asset is her face.