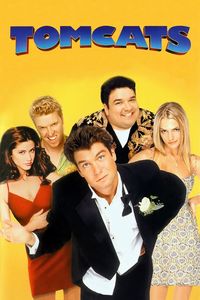 (In theaters, July 2001) In a few years, whenever the gross-out comedy sub-genre is finally dead and buried, film historians will look upon Tomcats as the film that got fatally contaminated by the trend. In concept, it’s similar to The Bachelor‘s theme of marriage-as-trauma for single guys. (Except that Tomcats protagonist Jerry O’Connell exhibits more charisma lying unconscious than Chris O’Donnell ever did in his entire career.) In execution, most of the film is actually quite enjoyable. While contrived, the gags work well in a pleasantly charming way. Unfortunately, this is marred by a few sequences that borrow a bit too much from the latest excesses in tasteless comedy. One such hospital sequence lasts five minutes, is only tangentially related to the plot, will make every guy in the audience visibly squirm. By itself, said sequence takes off a full star from the film’s final rating. Cut it, along with a few other weak jokes, and the film suddenly becomes a marginal recommendation. Tomcats has a dynamic rhythm, appealing actors (with particular props to Shannon Elizabeth, who never struck me as gorgeous before, but really kicked in my strong-women-in-uniform fetish in this film. Oh, and I liked Bill Maher too, except in a wholly different way.), unexpected parodies (loved the Mission: Impossible 2 doves) and a few very strong individual sequences. (The standout remains the one that begins as my basic redheaded-librarian fantasy and ends up straight from my worst nightmares) It’s a shame that the stench of tastelessness overpowers the rest of the film.