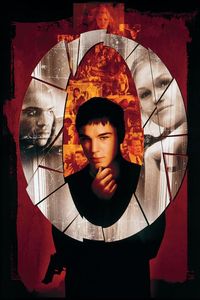 (In theaters, October 2001) The late nineties have seen a plague of classics adapted as teen movies, most of them comedies (10 Things I Hate About You, Clueless, etc…) with the occasional drama (Cruel Intentions). Interestingly enough, most of these films have been decent. The latest entry in the subgenre, “O”, is a re-working of Othello set in a high school. Completed in 1999 but held back two years in the studio’s vaults after the Columbine tragedy, “O” is an interesting reworking of a die-hard Shakespearian tragedy that pulls few punches, and ends in the expected bloodbath. Josh Hartnett is chilling as the amoral Iago/Hugo beautifully manipulating the rest of the cast like puppets. There’s a certain perverse satisfaction in seeing such a merciless character at work and Hartnett twists the knife even more by playing Hugo as someone who can’t even derive any satisfaction in destroying everyone’s lives. In any case, the end result is fascinating in part because of the great adaptation work (war as basketball: genius!), but it’ll certainly hold your interest on its own.