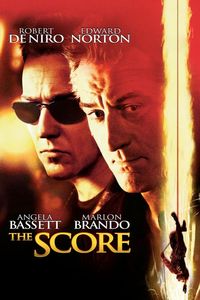 (In theaters, October 2001) As a French-Canadian, it’s always a lot of fun to see Hollywood in Montréal and Montréal in Hollywood. After The Jackal and The Whole Nine Yard, here’s The Score, which uses the city to its best potential yet. No Bruce Willis in sight, but the star-power of the film is stellar: Ed Norton, Robert de Niro and Marlon Brando, collectively representing the best actors of three generations. Excited? Don’t be. For one thing, Marlon Brando is an undistinguishable wreck though the whole film. For another, there’s scarcely anything to do during the whole script for the two remaining superstars: The Score is built around a heist, but only one heist. It’s all depressingly linear: Whatever small twists and counter-twists the film possesses can be seen coming well in advance (or simply by watching the trailer) Heck, Angela Basset has, what, only five minutes of screen-time? Oh, the scenery is nice, what with de Niro walking through the City and most actors uttering a French line or two. Some technical details are interesting. But that’s pretty much it. The rest of the film is an exercise in waiting until the end.

(Second viewing, On DVD, February 2002) I wasn’t overly impressed when I saw The Score in theaters, and I’m still not convinced after seeing the special-edition DVD. While it’s not a stupid film, it’s a curiously uninvolving one; despite the considerable acting talent assembled here, (De Niro, Norton, Brando, Bassett) there are no standout performances nor any particularly noteworthy moments. The plot is depressingly linear and without surprises. Montréal stars. The director’s commentary is more concerned about good cinematography, location anecdotes and ad-lib acting than telling us why the film falls so flat. The rest of the DVD is standard material, except for an interesting continuous shot of three ad-libbed takes by Marlon Brando. It’s a satisfactory rental, but not much more.