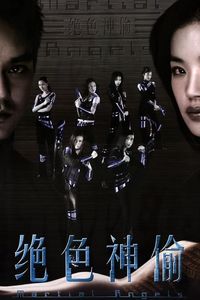 (On TV, November 2001) Oh, the wonders of Asian cinema. Here we have an action movie starring half-a-dozen young female protagonist in what does actually sound like a Charlie’s Angels derivative. Too bad it just falls flat. To begin with, the protagonists all look like each other. Then the ho-hum plot does nothing to attract or retain interest. While there are a few good directorial flourishes and the plot finally starts to move late in the film, the overall effect is less, much less than we could have hoped for. The action scenes are merely serviceable, and so are the few laughs. Too bad, really; in an environment where men dominate the action cinescape, it’s interesting to see a film where men are either evil or fools and where the ladies are so obviously carry everything. Oh well. The opening credit sequence is cool.