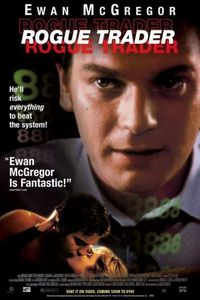 (On VHS, December 2001) Ewan McGregor is quite good playing the life story of Nick Leeson, an ambitious trader who eventually managed to accumulate a billion’s worth of debt and bankrupt a venerable financial institution. The film does wonders to explain the complexities of financial trading in an entertaining fashion. There is a notable lull in the pacing about midway through, as the first crisis is past and the second one is building. Naturally, this is a biographical portrait based on Leeson’s book, so expect a certain degree of bias for poor honest Nick. Directing, photography and dialogue are strictly serviceable. Not a bad movie at all, especially given the arcane subject matter.