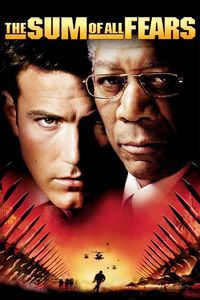 (In theaters, May 2002) As a big fan of the source Tom Clancy novel, I can’t help but grimace at some of the changes and simplifications made to the original novel. But even I have to recognize that the film adaptation is much better-paced than the original. Even the idea of casting a younger Jack Ryan works splendidly. In fact, the only problem I have with the film adaptation is that one of the novel’s most thrilling threads (which eventually forces Ryan to start a constitutional crisis) is abandoned. But there’s so much good stuff in the end film that it’s almost ungrateful to complain (heck, even Pat Foley is in there!): For maybe the first time in recent memory, we have a film version of a true techno-thriller. (I could have done without the warehouse fight, though). Anyone looking at the film as an action movie is bound to be disappointed; this is a thriller, with intelligence and cleverness as the main weapons. There are weak moments (who couldn’t predict that the French ex-conspirator would be killed almost immediately?) and dull stretches, but overall, the film is true in spirit to the book, and the book was a fantastic story. Cheers, relief and hurrahs: This one’s worth a look.

(Second viewing, On DVD, January 2003) Filmed Thrillers are not rare, but filmed techno-thrillers certainly are. So are filmed thrillers that take The Big View, dealing knowledgeably with affairs of states from the perspective of the states: Cinema simply doesn’t have the depth required to make such stories believable. And yet, The Sum Of All Fears, despite the radical simplifications of the original novel’s plot, works splendidly. It’s a thoughtful, professional film that makes interesting artistic choices and then sticks to them. (No countdown? Audacious!) It holds up really well to a second viewing, though the similarities to Jack Ryan’s previous adventure The Hunt For Red October are harder to ignore given his once-again role as the rookie analyst plunged in action. (This is not a sequel, but a new first chapter in another series, we’re told). The DVD contains a few informative supplements, plus a wonderful commentary track with director Phil Robinson and author Tom Clancy: “Hi, my name is Tom Clancy. I’m the author of the book they ignored while making this film.” Clancy is a grouchy good sport, calling out “this is bullsh*t” several times on scenes he judges implausible. Director Robinson repeatedly catches him off-guard with some new information, though. Good fun, good movie.