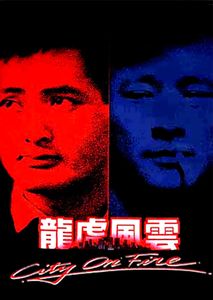 (On DVD, October 2002) Yes, this is the film that inspired Quentin Tarantino’s Reservoir Dogs, a fact that will be obvious to viewers only five minutes before the end of the movie. Fans of Hong Kong action cinema might want to temper their expectations a bit before watching City On Fire, though: It’s far more of a straight-up criminal thriller than an out-and-out action film. As a film, it succeeds almost purely on the strength of lead Chow Yun-Fat’s charisma. While he plays a horny, cocky and slightly unlikeable character, Yun-Fat does it with such charm and coolness that it’s hard not to be attached. Otherwise, this is standard Hong Kong cops-and-criminals stuff, with the typically dark ending made even more poignant by our attachment to the protagonist.