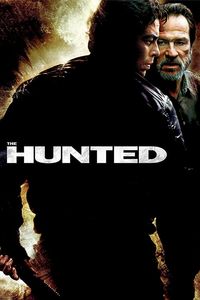 (In theaters, March 2003) By now, we’ve seen so many movies about escaped psycho ex-special-forces fugitives that we can dispose with exposition. And that’s exactly the path taken by The Hunted, a film that feels like a snappy adaptation of a lengthier novel. It cares so much about its audience’s comfort that it even features Tommy Lee Jones in the exact same role he’s played in half of his movies for the past decade. It’s strictly hunter-hunted stuff (appropriately enough), but executed with a brutal flair that doesn’t flinch as blood sprays under the cool north-western drizzle. The final battle is particularly punishing, as the two lead characters keep on bashing each other with a variety of painful instruments. There’s nothing nice or cool about the violence in The Hunted, and that alone sets it apart from most run-of-the-mill thrillers. Alas, it’s not nearly enough to make it memorable. The bare-bones script has intriguing elements, but they’re quickly forgotten in the rush to the conclusion. Some characters, such as most of the female characters, appear for a scene or two and then quietly disappear in the background. It’s enough to make anyone wonder about a bunch of presumably deleted scenes. (One scene that should have been deleted, however, is the one where a massive manhunt is interrupted as both lead characters take the time to fashion knives from rocks and scrap metal. Hey, no kidding.) In the end, The Hunted may be brutal, but it’s not much more than that.