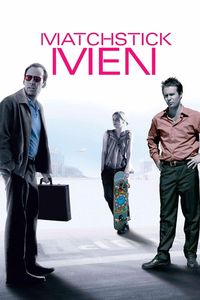 (In theaters, September 2003) Yet another con man film at a time where we’ve seen a number of them in recent months. But even though, yes, there is a con both on the characters and on the audience, the heart of the film is more of a character study, starring Nicolas Cage in another deeply neurotic performance. Matchstick Men is a story of how conning is affecting the protagonist, and how he’s able to come to a point where he’s able to kick the habit (sort of) and become a better person. Director Ridley Scott once again throws just about everything he’s got on the screen in the hope that some of it will stick and the result, as may be expected, is very uneven. Some of Cage’s antics are annoying, but as usual he’s never as good as when he’s foaming with rage. (Just wait until late in the film). It’s not a particularly deep film, but there’s a twist, a few good scenes, and high-grade production values that are seldom uninteresting. It’s not flashy, but it does the job. Some will have a problem with the happy ending (which reportedly wasn’t to be found in Eric Garcia’s original novel), but it fits with the overall thrust of the movie, which is the story of a man who happens to be a criminal and not the story of a criminal per se.