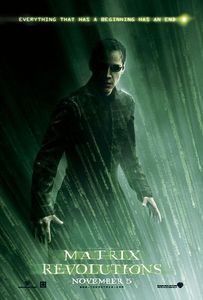 (In theaters, November 2003) Sometimes, it’s best to take one’s inner fanboy and temporarily lock it in a cage. Otherwise, said fanboy would rant on and on about how, even with its problems, The Matrix Revolutions is one of the year’s most enjoyable film just because it so happens to be one of the very few hard-core SF films of 2003. Well, stuff the fanboy and let slip the vitriol of betrayed expectations. By far the most infuriating thing about this third episode in the series is how it doesn’t even answer the dozens of questions raised by the second film. It lets all the balls drop, one by one, until the juggler is left saying “sucker!” But the film’s flaws certainly don’t stop there: The elegant focus of the first film was diminished in the second and finds itself crudely forgotten here: all is chaos and confusion, whether you’re talking about the dialogue, the themes, the visuals or the direction. In the process, all of what made the first volume so worthwhile has been ignored. The characters are emotionless parodies of themselves. The dialogues are painfully predictable. The special effects aren’t half as spectacular as Tharini Mudaliar in her all-too-brief appearance. Then the conclusion sinks into the woo-woo morass that has afflicted so much anime in the past; a pointless fight which only concludes when the screenwriter simply decides so, and in which the viewer has to perform all of the intellectual justifying work. Ay, yay-yay, what an ignominious end for a trilogy that had started so well. The Wachowski brothers pretty much blew up all accumulated credentials with this misguided effort, and effortlessly proved the law of diminishing returns: However much money and chaos you put on screen, sometimes it’s just not worth the effort. It’s fitting, in so many ways, that even the Rage Against The Machine-less soundtrack is the lesser of all three films.

(Second viewing, On DVD, April 2004) Nope, still haven’t changed my mind about the film: It’s a lousy end to a trilogy that had started so well, but there’s still enough pure Science Fiction content and images to make me happy. This initial DVD edition, however, has a lot of good stuff in reserve: Plenty of special-effects supplements (you won’t believe some of the stuff they had to use for the final fight!), some useless background material (including a badly-designed collection of stills and “historical” information) and an intriguing look at a on-line game that will probably look quite silly in two or three years. Die-hard The Matrix fans ought to get this, if only for the sake of completing the series.

(Third viewing, On DVD, May 2005) I suppose that only the most ardent fans of the film will have the patience to watch both sets of commentary tracks on The Matrix Ultimate Edition trilogy. Those brave few who do, however, will get much out of “The Philosophers” commentary: Ken Wilbur and Cornell West each bring a perspective on the meaning of The Matrix trilogy that does much to add depth to the second and especially third segments. Don’t get me wrong: I still thing that this third volume is over-indulgent, long and falsely profound, but Wilbur’s idea about the trilogy being the story of the re-unification of disparate realms (body, mind and soul; blue green and gold; Zion, Matrix and Source) in a new trinity (a Neo/Trinity, one might say) brings a different light to it. Not bad, but still not recommended to anyone who’s not already a freakishly obsessive fan.