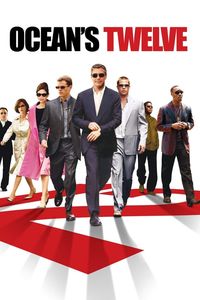 (In theaters, December 2004) There are two Steven Soderbergh, and the wrong one directed this sequel. The first Sonenberg is the cheerfully commercial director, the one who did Erin Brockovich and Ocean’s Eleven. His movie may not have much depths, but they’re fun and slick. The second Soderbergh is the artiste. He makes Hollywood home movies like Solaris and Full Frontal, which excite film geeks but leave audiences yawning in their seats. And so it goes with Ocean’s Twelve, a wannabe crime caper that looks and feels as if it was a collection of outtakes for a more coherent film. Shot with the usual artistic grain, featuring elliptical dialogue and experimental direction, Ocean’s Twelve is artsy because it thinks it can get away with it. (From the box-office receipts, it sure looks as if it’s right.) But what it really does is screw with a story simple enough to bore schoolchildren. The hook of the “thief’s underworld” is quite nice, as is the developing competition between Danny Ocean and François Toulour. But the rest feels like a waste of time, from cryptic appearances by Robbie Coltrane to a dumb scene with Major Hollywood Stars pretending to be themselves. Imagine our deep and abiding interest as an audience. Catherine Zeta-Jones seems to be working with only a fraction of the charm she has, and that also goes for the rest of the players. Oh, there are enough satisfying scenes here and there to stave off outright dissatisfaction, but one impression remains: We, the audience, are paying for this superstar Hollywood vacation film.