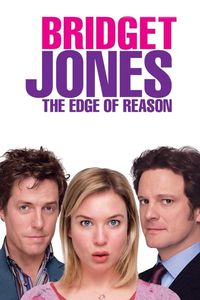 (In theaters, January 2005) The first rule of happy romantic comedies are that they end at the right moment. There is no rational reason for them to have sequels, given that the ending is already pre-ordained and all you get is ninety minutes of needless complications. What’s worse in this case, however, is that this sequel raises anew the question “What does he see in her?” and fails to offer any good answer. What’s left is a series of “oh, isn’t she adorably stupid!” moments, of which we had quite our share in the first film. Gaah. (And I liked the first film.) Fans of the book will be both pleased and saddened by the considerable changes wreaked on the plot line: No more incompetent handyman, no more interview with Colin Firth, no more uncomfortable suicide attempt. More of Hugh Grant as Daniel Cleaver. More of Colin Firth as the unflappable Mark Darcy. Much more of Renee Zellweger as Bridget Jones. (She looks a lot more curvaceously attractive here, extra pounds and all, than the featureless stick-like waif she played in Chicago.) I suppose that undemanding viewers will enjoy more of the same. For the rest of us, though, enough is quite enough. No reason, no edge either. Hey, who knew Thai prisons were so entertaining?