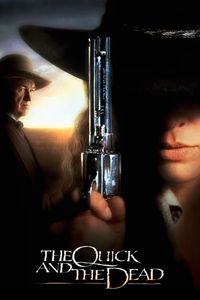 (On DVD, March 2005) The Western genre has rarely been faithful to the historical reality of the American west, opting for operatic grandeur and machismo myth-making over the true grime and uneventful routine of the era. This film cheerfully won’t do anything to correct the record: here, the wild west is only a backdrop to a series of shoot-em-up duels, aggrandized by ridiculously overblown personalities and heightened visuals. I say this like it’s a bad thing, but it really isn’t: The Quick And The Dead is most enjoyable when it goes for broke in its quest for the ultra-Western, and at its weakest when it tries to inject realism (or its boring cousin, “motivation”) into a framework that doesn’t need it. As a tongue-in-cheek take on the pistol-duel shtick, it’s hugely enjoyable. Too bad that it chose to saddle itself with a clogging revenge story, complete with lengthy flashback and barely-repressed rage. But that takes maybe ten minutes, and the rest of the film is a lot of fun: The impressive cast is awe-inducing even today: Gene Hackman has rarely been better at chewing scenery, and any film that managed to snag both pre-stardom Leonardo Decaprio and Russell Crowe is nothing to dismiss easily. Sharon Stone herself has lost a lot of starpower in the decade since this film (and her middling screen presence here may show why), but she looks cute enough as a female gunfighter. The fifth cast member worth noticing is director Sam Raimi, who infuses the film with some much-needed style. Realistic? Absolutely not. As tight as it could be? Heck no. Fun to watch despite everything? Oh yes.