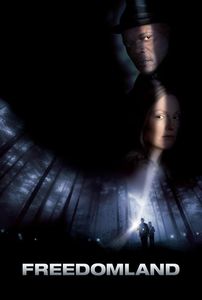 (In theaters, February 2006) Frankly, I’m still not too sure what to make of this film. An uneasy hybrid between drama and thriller, with a sprinkling of social issues that never completely melts into the main plot-line, Freedomland attains a remarkable middle ground between quality and boredom. Some parts are so familiar that they play on auto-pilot: Samuel L. Jackson turns in another effortless performance as a intense policeman, and Julianne Moore delivers yet another performance as a bad mother who can’t find her child. The dialogues are similarly cut from other films of the same genre, while the direction, especially when it works, has no distinguishing characteristics. But it doesn’t always work, and Freedomland ofter veers into self-serving stylistic moments that seem consciously tacked-on. It doesn’t help that Julianne Moore’s character immediately evokes feelings of loathing: that the film then spends its duration proving us right is no recipe for surprising twists. But worse is the feeling that some weighty issues about racial tensions, middle-aged alienation and criminal tendencies are raised in service of an insubstantial story. Freedomland brings to mind weighter fare such as Mystic River or L.A. Confidential is how it does not manage to successfully integrate wider social issues in a thriller template. Indeed, Freedomland feels somewhere between drama and mystery, not as a successful hybrid, but as a failed attempt that couldn’t commit to either one of those storytelling poles. Even Crash, as wildly preposterous as it was, ended up being a far more satisfying film.