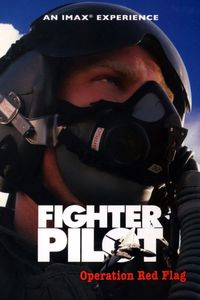 (In IMAX theaters, March 2006) As a certified military hardware buff, I had a number of dropped-jaw moments during this documentary. Covering (and re-creating) the annual “Red Flag” training tournament, director Stephen Low’s Fighter Pilot: Operation Red Flag gives us military planes on glorious 70mm negatives and kick-ass surround sound. Just wait until you see a B-2 Spirit stealth bomber slide into view, or hear the heart-stopping rumble of an A-10 Warthog main gun. While the structure of the film can be a scatter-shot of cool scenes that only aviation geeks will love, the quality of the pictures more than makes up for it. It generally improves by the end of the film, even concluding with a rescue sequence that easily belongs in a Bruckheimer action movie. A lot of stuff blows up. It’s all good. Given the international nature of the “Red Flag” exercise, Canadians even get to hear a snippet of Québécois. Albeit limited by the nature of the venture (This film would have not existed if it wasn’t for the collaboration of Boeing and the Air Force), Fighter Pilot is a lot of fun for aviation enthusiasts. What for sure is that this isn’t the usual Omnimax nature film. (In Omnimax theatre)