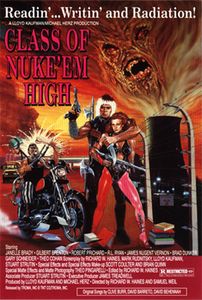 (On VCD, April 2006) Troma film; what more is there to say? Actually, this is a bit more interesting than The Toxic Avenger, with a touch of social commentary, decent special affects (for 1986) and the unbelievably cute Janelle Brady as the heroine. The plot is a mess of radioactive goo, monsters, bodily changes, teen sex, potent soft drugs, student unrest and motorcycles. You can’t call this film good, but you can say it’s spirited, with almost enough energy to make anyone ignore the wall-to-wall inanity. Compared to The Toxic Avenger, this film is less linear, somewhat denser, a bit funnier and generally more competent from a technical standpoint. (There are a number of arresting scenes that wouldn’t be out-of-place in a better film.) Still, it goes without saying that this form of film-making is for a very specific type of viewer: It probably loses half its charm per year once you’re older than 15. This version of Class Of Nuke’em High is the (legal) “Gametek cinema digital movies” one that was converted to Quicktime format and sold in computer stores in the mid-nineties. Audiovisual quality: atrocious, but at least you can make up most of the film.