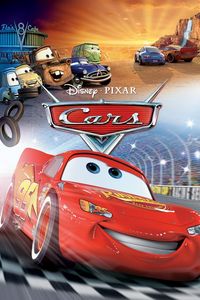 (In theaters, June 2006) From anyone else but Pixar, this film would be a mega-hit and a critic’s darling. From Pixar, it’s just another film in their collection, maybe not as good as some of the other ones. It’s certainly problematic at times: overlong, too sentimental and afflicted with muddled nostalgia. While Pixar films usually stand up well to multiple viewing, I have the feeling that many will choose to fast-forward a number of segments. Plus, I defy anyone to watch the romantic subplot and not think “Car Sex? How does that work?” And yet focusing on the film’s problems would be doing a disservice to the film’s undeniable qualities. While the story is a threadbare feel-good classic of redemption and the characters are pretty much all out of central casting, there’s a relentless degree of creativity in how the designers and animators were able to give human characteristics to cars. Some of the attempts look goofy, but others work surprisingly well. (I was particularly amused at the celebrity caricatures.) Otherwise, well, it’s “just” a solid movie for kids and adults alike… though the adults may not want to see this more than twice.