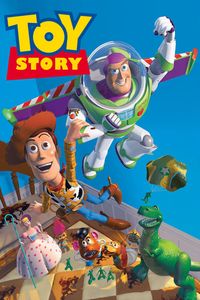 (Third viewing, On DVD, August 2007) The amazing thing about this film is how well it does most things, regardless of how it was the first computer-animated feature film in history. The boys at Pixar obviously knew what they were doing even there (despite their protests elsewhere on the disc) and the result is, even despite the advances in technology in twelve years, still a pleasure to watch. The lavish tenth-anniversary DVD takes its time to explain to jaded audience what was so revolutionary from Toy Story back in the prehistoric days of 1995, but the gem still remains the film itself. See it again!