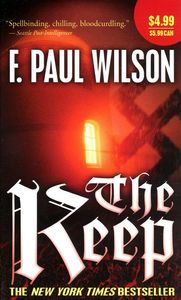 I’m always impressed when the years move on and leave certain books unaffected. To the dismay of anyone trying to write for posterity (if there’s such a thing when there are bills to pay), decades can be very unkind to any kind of fiction. Beyond contemporary settings, there are dozens of ways for books to be stuck in time: outdated social assumptions, unfashionable prose or crude genre conventions. Even in Science Fiction or Fantasy, setting a story in the future or the past doesn’t necessarily erase the mark left by the writer’s present. So imagine my surprise to find out that F. Paul Wilson’s The Keep still feels just as fresh today as when it was published in 1981.

There’s a trick, of course: The version of The Keep I read isn’t the version that was published twenty-five years ago. It’s been reviewed, retouched and reprinted, validated and enhanced along the way like few other early-eighties horror novels have been. Dig deep enough, and you will even find that it was adapted for the big screen in 1983 by none other than director Michael Mann. (Good luck seeing it, though: The film is conspicuously absent from DVD format catalogs, and rumor has it that Mann himself isn’t too keep on reviving it.)

Then there’s the detail that the book was written to be a World War 2-era supernatural thriller, already taking it further away from instantly-recognizable contemporary cultural references. At a time where horror novels simply required a monster and people to slaughter, Wilson aimed for more ambitious targets by reaching back in time and space to set his monster/haunted-house story in 1941 Romania. When a group of Nazi soldiers occupies an isolated keep deep in the Transylvanian Alps, they awaken something out for their blood, at a determined pace of one death per night. Terrified, they ask for help; alas, the elite reinforcements prove ineffective. Desperate, they end up reaching out to an expert on local legends, a wheelchair-bound intellectual who happens to be Jewish. But even the scholar and his daughter don’t suspect the repercussions of what has been unleashed in the keep…

One of the reasons why this book is still in print today is that it forms the cornerstone of Wilson’s Adversary cycle, which also spawned Wilson’s “Repairman Jack” series. While The Keep initially looks and feels like a particularly ornate vampire story, Wilson has a larger framework in mind, and the barest hints of the menace are revealed in this first volume. Suffice to say that this isn’t a mere vampire at play, and that the roots and consequences of the novel won’t be limited to 1941.

But the best reason for the novel’s continued popularity is that it’s slickly written and a hugely enjoyable page-turner. Wilson’s prose is clean and compelling, and his ability to keep readers coming back for “one more chapter” is terrific. While the tight suspense of the first half eventually cedes way to a looser second half, the strong characters keep up interest until the end despite ever-larger developments. The delight with which Wilson multiplies the complications (by bringing in “good” Nazis, the looming menace of another concentration camp, a mysterious stranger traveling to the Keep, unexpected shifts in allegiances, and so on) is the stuff from which satisfying novels are made of. Plus, hey, it’s all-too-easy to lose sight of the most excellent premise: Nazis versus monsters! What’s not to like?

The historical detail is convincing, Wilson generally avoids the easy Nazi clichés and the first 150 pages are a model of increasing tension. No small wonder that The Keep still attracts an audience more than a quarter-century after its publication. Even for experienced horror readers, the novel still carries its own kick. There’s a good chance that The Keep will still be just as readable in 2031.