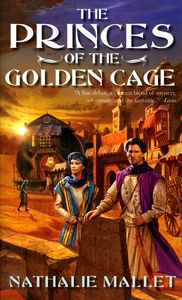 Here’s my obligatory disclaimer: I really wanted to enjoy this book. I first met Nathalie Mallet at Vancouver’s V-Con convention in October 2007, but really started talking to her at the following month’s World Fantasy Convention in Saratoga. Like me, Mallet is a fluently bilingual French-Canadian living outside Quebec. Quite unlike me, she now has a novel on sale from an American publisher: The Princes of the Golden Cage, free copies of which were available by the boxful to WFC attendees.

It’s a noteworthy book for several reasons, the most intriguing of which being that this is Night Shade’s first mass-market paperback publication. Traditionally known as a specialty trade paperback house, Night Shade now aims for a bigger market with this new format, and it speaks much of their confidence in the novel to have selected it as their first title in this new audience-friendly format.

But you can imagine my anxious hope when The Princes of the Golden Cage finally ended in the pole position of my reading stack: What if I didn’t enjoy the book? After all, fantasy isn’t my genre of predilection: a lot of it bores me, when I’m not being quietly infuriated by the clichés of the genre.

Since I’m more likely to stay silent than to be overly critical of friends and good acquaintances, you can guess by the existence of this review that I found quite a number of things to like about the book.

The first obvious distinction is that this fantasy is set in a different mold, partly inspired by Arabian mythology and partly shaped by the demands of palace intrigue. The hero of the tale, Prince Amir, is the son of the Sultan, but that’s not much of a distinction given where he lives: an imperial palace where more than a hundred of the Sultan’s sons subtly compete for the title of heir while they await their father’s death. You can imagine the posturing, but Amir has opted out of the race: by focusing on academic pursuits, he hopes to stand aside from the melee and live a quiet life. Alas, events soon run against him: When his brothers start dying in mysterious, perhaps occult circumstances, he is summoned and put in charge of discovering the murderer. So much for keeping a low profile.

Further complications arise when he befriends another young man who seems to enjoy an unusual amount of freedom. Then there’s princess Eva, already betrothed and yet so irresistible…

It’s a fantasy, it’s a romance, it’s an adventure, it’s a mystery, it’s a big tangled web of intrigue and it’s almost immediately compelling. Prince Amir is a fine nebbish protagonist and while he’s not much of a hero at first (I wondered at times if the author wasn’t trying to pull off a BIG TROUBLE IN LITTLE CHINA inversion of sidekick/hero roles), he’s instantly likable and earns his own little triumphs. The twists and counter-twists piles up almost too neatly with the metronome precision of a tight movie script, but the overly-complicated ending ties it all together with a bow and a nice flourish.

This being said, it’s regrettable that Night Shade goofed up its new paperback production process and let an unacceptable number of copy-editing mistakes in the book: The number of curious word substitutions clearly shows that a spell-checked manuscript isn’t necessarily free of errors. (Yes, I’m deeply aware of the irony in pointing this out on a review site that riddled with such mistakes. I know, I know.)

I may not be the ideal or most dispassionate reader for this book, but I enjoyed it more than I thought and almost as much as I had hoped for. It may have a few first-novel rough edges (and the imperfect copy-editing makes me wonder if it wasn’t rushed in production), but I rarely enjoy fantasy novels as much as this one. A sequel, The King’s Daughter is already scheduled for mid-2008: does that mean I’ll have to take a chance and look in that “fantasy” section of the bookstore?