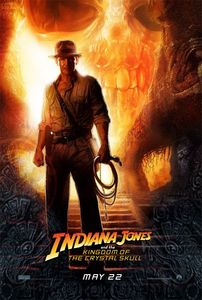 (In theaters, May 2008) No movie could match the expectations regarding the further adventures of a now-archetypal hero. The most this fourth entry could do was to avoid disaster, and that’s generally what Spielberg and the gang manages to do here: Among other smart moves, they acknowledge the age of the character but doesn’t makes it a target of easy jokes, they adapt the tone to fit the fifties-setting of the story and they wink at the other films without drawing too much upon them. This being said, they do indulge and make some easily-avoided mistakes: The revelation of Mutt’s lineage is too obvious to be much of a shock, the film’s numerous missteps in mysticism are unnecessary (so are the gratuitous CGI groundhogs) and the film’s huge plausibility problems defy even loose pulp standards. Jones himself remains a remarkably passive protagonist, the last few minutes of the film unfolding without much participation from him. Even the thrills seem dulled: a retracting staircase sequence ends up giving the characters nothing much than a mild dunking. Yet the film itself fits with its three predecessors, never touching the superlative greatness of the first volume, but duking it out with the two others in overall ranking. It’s hardly perfect, but it ought to satisfy most even as it introduced the short-lived expression “nuking the fridge” into the vernacular.