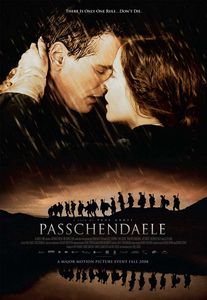 (In theaters, November 2008) Criticizing this movie for its melodrama feels a lot like kicking a puppy for its inherent doggyness. But at some point, it’s required to drop the whole “most expensive Canadian movie ever made! About Canadian war heroism! Based on a true story!” thing, step back, and cackle at some of the film’s worst moments, from Paul Gross’ Jesus complex to the lopsided structure, the mawkish scenes and the dramatic shortcuts. That the film is made with the best of intentions doesn’t excuse the hour-long snooze set in Calgary, or the too-short time spent on the front. Best intentions don’t require a ten-second detox scene, clichés from sixty-year-old movies or a final sequence taken from the Stations of the Cross. As much as it’s tough to dislike the film’s impressive historical recreation, the charm of the actors or the intention to tell a typically Canadian piece of history, Passchendaele stumbles when comes the moment to put it all together. The result will go well with those who (for various reasons, many of them politically partisan) really want to “support our troops”. Alas, it will have a much tougher time crossing over to a larger audience that isn’t already sold to the film’s emotional manipulation. Despite the film’s fascination for crucifixion, it has to do more than sing to the choir.