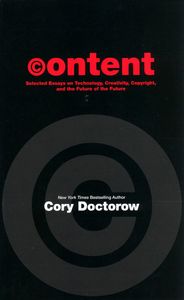 Cory Doctorow’s non-fiction collection Content is both essential and redundant.

It’s hard to imagine that there’s someone out there who knows Cory Doctorow but isn’t aware of his stance regarding intellectual property. Doctorow’s an Internet celebrity, and everything he does seems influenced by his copyfighting, from editing Boingboing.net to writing novels celebrating open-sourced resistance to working for various organizations as a political/technology activist. He has written extensively about those issues on-line, and a book collecting those essays hardly seems like something worth much more than a passing note.

What’s more, copyfighting seems so native to the Internet that the idea of a paper book about it has a quaint mustiness. Nearly every piece printed in Content already lives on the web, where they can be linked, discussed and annotated as times goes by. Since the debate around intellectual property seems to evolve on a weekly basis, is it useful to time-bind Doctorow’s essays in a permanent format even as the context around the book keeps evolving?

And yet that’s a fairly narrow view of things. It may be hip to dismiss those paper-ink-glue devices from the virtual pulpit of a web site, but there’s no denying that by virtue of their collection in Content, Doctorow’s non-fiction pieces become something grander than what they are at the moment. Because, as strange an idea as it may seem to plugged-in cyber-nerds, not everyone is so taken with ideas circulated on the Internet. There is still a place for paper-set arguments, for respectable books that take actual space on a desk, on shelves or in briefcases.

In short, there’s still a physical life out there for Internet-native advocacy pieces. The nebulous notion of “Cory Doctorow’s ideas on intellectual property” gets an actual rectangular shape with Content, with the non-inconsiderable benefit that the object can be sold, bought, lent or cited. Content becomes something from which others can book conferences or consulting gigs.

Then there’s the old-fashioned entertainment aspect. While Doctorow’s non-fiction pieces are usually read on-screen between two (or two hundred) other things, Content can be read at leisure, with a good bookmark. It’s a pleasure to read in more ways than one: Not only are the ideas interesting, but the style in which they are expressed is vivid and argumentative, with plenty of examples and extrapolations.

There’s a flip side, of course, one that becomes nearly inevitable when putting together a number of similar essays: repetition. Cory Doctorow’s advocacy tends to revolve around a few common themes, and the examples can be very familiar. Many will note that Content doesn’t package all of Doctorow’s non-fiction between 2001 and 2007: It picks a few more famous earlier pieces (such as his 2004 DRM talk to Microsoft), then skips ahead to a more diverse selection of his 2006-2007 pieces, including a number of columns for Locus and Information Week. Readers may want to let some time elapse in-between essays, or risk quite a bit of deja lu.

The other nagging issue about this book is how instantly dated it was. For every timeless piece like his ever-relevant 2001 essay on the illusion of the semantic web, other essays are already creaking under dated references and shifting goalposts. Content may be as fresh as 2007, but 2009 is already a different world from two years ago: Many of Doctorow’s points have already been conceded by industries that have come to terms with economic realities: Both the RIAA and MPAA are far less aggressive about intellectual copyright than they once were (losing a number of court challenges hasn’t helped), and “DRM-free” has become an actual selling point for no less a former enemy than iTunes. Meanwhile, TV networks are voluntarily putting freely-downloadable material on the web. Finally, Cory Doctorow himself is not the Cory Doctorow of 2007: He’s now a proud father, a husband and a New York Times best-selling author thanks to the runaway success of Little Brother —a book that widened open-computing principles to include not only copyfighting, but civil disobedience in the face of eroded freedoms.

So it is that “a science fiction writer” (a description that never totally quite fit Doctorow’s full-bandwidth activism) is well on his way to becoming no less than An Authority. A book like Content can be invaluable in the process: it can be placed on reading lists, passed around firewalls and content filters, cited in major newspapers (even if they’re moving to the web themselves) and bought by the crate-load whenever Doctorow’s speaking at conferences. It’s a neat bit of irony that most of this review has been spend arguing in favor of a real book: in some ways, Content is its own best demonstration.