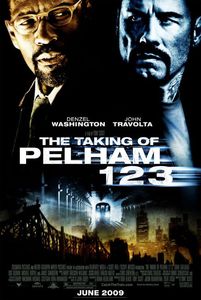 (In theaters, June 2009): Those looking for a New York crime thriller should be pleased by this latest remake: while the film is good enough, it stops short of being anything more. Director Tony Scott keeps his usual hyper-kinetic tendencies under control, only unleashing them during the credit sequence and a few high-speed interludes. The rest of the film is polished and played generally well by John Travolta and an unglamorous Denzel Washington. Most of the hostage drama is dedicated to a sometimes-contrived actor’s duel, at the expense of the hostages’ characterization. It’s engrossing enough until the third act, when our protagonist keeps volunteering back into a situation that is clearly not his to solve; it all leads to a ridiculously blood-thirty conclusion that hasn’t earned its over-the-top drama and actually diminishes the everyman quality of our tainted hero. As for the rest, well, the remake is generally successful at erasing the seventies origins of the previous film: There are financial shenanigans, high-tech gadgets and plenty of references to contemporary New York. With a stronger and more appropriate conclusion, The Taking of Pelham 123 could have made onto the list of genuinely good thrillers. As it is now, it’s a good-enough choice whenever everything else has been seen.