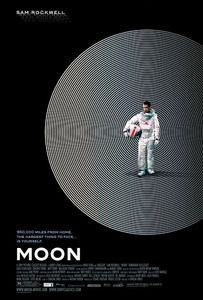 (In theatres, August 2009): Let me count the reasons why I wanted to love this film: It’s a pure science-fiction piece whose visual aesthetics clearly owe something to great SF films of the seventies.  It’s a quiet piece of psychological drama, limited to a few sets and a handful of characters (including a strong performance by Sam Rockwell.  It’s relatively smart, doesn’t depend on action or humour, and was produced on such a small budget that, if it’s successful, it may lead to other SF films of the same ilk.  Furthermore, Moon has been acclaimed by critics throughout its limited-release run, which is another rarity for films that wear the “Science Fiction” label with pride.  This being said, Moon may be a bit too successfully SF for its own good in that it wants to be compared to top-level genre stories… to its detriment.  No one will question the scientific accuracy of Star Wars, but the realism of Moon’s setting and machinery create expectations that can’t be met by the rest of the film.  As a nitpicky nerd, I was bothered out of my suspension of disbelief by such scientific errors as the Earth-normal gravity, the communications without light-speed delays or (ack!) the use of Helium-3 as an energy source.  Other signs suggest that the seventies aesthetics also betray the last time the screenwriter seriously read top-level SF: Question the assumptions of the plot (that a vital money stream depends on a single human point of failure; that the base’s Artificial Intelligence is incarnated in a single machine rather than distributed throughout the entire complex; that one would jam signals through blunt interference rather than by selectively manipulating the data stream) and everything feels dated and simplistic.  Throw in more explosions, gunfights and bouncy wenches and no-one would question Moon seriously.  As it is now, though, it looks close enough to hard-SF to be considered by hard-SF’s own standards and suffer from the comparison.  It’s still a really interesting film, of course, but it’s hard to recommend as a success when it fails to withstand the scrutiny it invites.