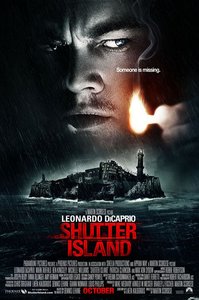 (In theaters, February 2010) First five minutes: Promising direction by Scorcese.  Last fifteen minutes: Pretty much the same as in Dennis Lehane’s mind-bending thriller.  In-between: Your reviewer slept through a terrible headache.  Consider this a placeholder for a real review coming shortly.

(In theatres, March 2010) As suspected, staying awake during the film does improve the experience quite a bit.  While I can’t see the film anew without any idea of what’s coming (first having read Lehane’s novel, then having caught the big end revelations during my first sleepy viewing), it’s not such a bad way to evaluate the film.  Even knowing the ludicrousness of the underlying premise, the film is still satisfying: it’s a brilliant illustration of what a skilled director like Scorsese can do with pulp-thriller plotting.  There are, as it turns out, plenty of subtle and unsubtle clues about the real nature of the film even from the get-go, and the filmmaking itself is compelling: The cinematography is clean, the scenes move well, the actors are interesting and the stormy atmosphere, so important in thriller, is all-powerful.  At times, it feels like a realistically-presented waking nightmare, and that’s already quite a bit better than the average cookie-cutter thriller.  The premise is still as aggressively nonsensical as it has even been, but that doesn’t matter as much: Shutter Island is an engaging thriller built upon a flimsy foundation, and it works a lot better than a flimsy thriller built upon an engaging foundation.  Even those who feel “spoiled” by knowing the film’s twist may end up liking it better than those who come at it perfectly cold.