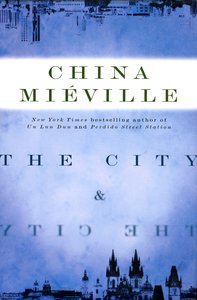 Every China Miéville novel is an experience, but I don’t think I was expecting what I got from his latest The City and the City. For the book answers one question that I’ve been reluctant to ask: Is it possible to enjoy a novel during which disbelief is never suspended?

Funny thing, disbelief: While we can probably agree that fiction should strive to represent the human condition as best as it possibly can, those ideals of realism quickly seem to go flying out of the window once we’re dealing with speculative fiction.  After all, suspension of disbelief becomes a necessity and a prerequisite to get any enjoyment out of stories set knee-deep in aliens, elves and blood-sucking fiends from other dimensions.  Not that SF/Fantasy elements are the only thing that require disbelief: In recent years, I have found myself increasingly unable to get into stories with strong libertarian or even right-wing worldviews: Once I start muttering “It doesn’t work like that!”, it’s hard to follow without nit-picking everything in sight.  But while SF readers have long been conditioned to accept whatever premises authors require of them for the rest of the story, what happens when the premise can never be accepted?

So it is that The City and the City first appears to be a standard murder mystery: A woman’s body has been discovered, and it’s up to our hero to puzzle out the events leading to her murder.  Soon enough, though, we get to realize that this isn’t a simple mystery: Our protagonist is not living in one city, but a city that is intermingled with another one, each with separate zones that can be accessed though controlled entry points.  Different languages, different cultures and different laws: Citizens of the two cities are trained from the youngest age to consciously ignore each other until they become blind to the other city.

I’m not doing the concept any justice by stating it as blandly as this, but you can probably see the problems already.  Suffice to say that throughout The City and The City, I kept repeating to myself that this concept was nonsense, that it wouldn’t work like that, that it had more holes than a screen door, and so on.  I won’t even try a pitiful “…but Miéville makes it work!” because frankly, it never worked for me.  Not one single page.  I kept imagining kids leaping over fences, teens sneaking behind bushes, businessmen complaining about inefficiencies and governments slapping down this nonsense.

(Which doesn’t mean that I dislike the idea, or refuse to acknowledge its grain of truth: I suspect that my mental map of cities is very different from others: My downtown is linked between bookstores, Subway restaurants, bus stops and smart shortcuts, whereas even a close friend’s downtown may be riddled by clothing stores, McDonald’s, parking spots and other things I may not care for.  How often, after all, do you walk down a familiar street and suddenly “discover” a building, store or detail that you had neglected for so long?)

And yet, I found a lot to like about The City and the City.  Its lead character is a likable hero, even though his narrative arc is intensely predictable once the mysteries of his universe are revealed.  More importantly, it features perhaps Miéville’s most accessible prose so far: While I have fond memories of the baroque storytelling of his debut Perdido Street Station, The City and the City benefits from mean and lean thriller storytelling, with a stripped-down style that paradoxically hints at Miéville’s growth as a writer.  It’s quite a bit different from anything he has written before, and that too is quite an accomplishment.

It amounts to a very strange, uniquely challenging reading experience quite unlike any other.  I may not completely appreciate what Miéville was trying to do with this novel, but I can’t say I’m displeased to have read it despite never completely accepting the reality of its imagination.  If this is a failure, it’s such an interesting one that it barely counts as a problem.  My disbelief wasn’t suspended, but any hasty judgement certainly was.