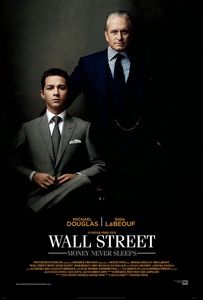 (In theaters, September 2010) As someone who’s on record as writing that the original Wall Street was “the definitive film of the eighties”, it goes without saying that I had been dreading the idea of a sequel: why mess with quasi-perfection?  As seductive as the idea was to revisit those characters in the context of another financial meltdown, there’s no need to say that the idea of a sequel was entirely useless.  After seeing the film, I still feel the same way: While director Oliver Stone’s film (he didn’t write it, curiously enough) is a lucid treatment of the 2008 financial crisis and has some interesting things to say about the shared hallucination that are today’s financial markets, it merely plays on the existing Wall Street brand and quickly becomes bogged down in a superfluous romantic drama featuring perhaps the blandest young couple in contemporary cinema.  (Shia LaBeouf’s continued acclaim remains a mystery to me given his lack of on-screen personality, but he’s a charismatic powerhouse compared to Carey Mulligan.)  With serial numbers filed off, Wall Street 2 is a lucid high-stakes drama skillfully dramatizing a difficult subject… but as a sequel, it lacks some oomph and magic.  Still, occasionally, it shines a bit brighter than usual.  One fascinating facet of the film’s direction is the blatant use of infographics to illustrate what the characters are saying, reflecting the way our world has become far more abstract since 1987, to a point that we even think in information being presented as computer graphics.  While Gekko’s character has been considerably softened (a good creative choice, given the character’s age and his prison experience), Michael Douglas’ august performance still makes him one of the film’s chief attraction –to say nothing of a delightful cameo from another character in the Wall Street universe.  What may be missing from the film, however, is the kind of dripping popular outrage that keen observers of the recent meltdown have felt at the way corruption, sociopathy, greed and sheer criminal behaviour are endemic in the financial sector.  Wall Street 2 never gets angry the way the original did, and seems content to play with money as long as the right people get some.  But wouldn’t that, in itself, be the most damning indictment of our times as seen from 1987?