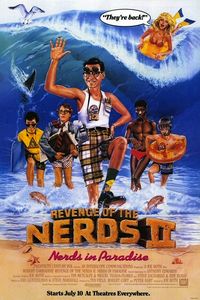 (On DVD, February 2011) Considerably inferior sequel to 1984’s original Revenge of the Nerds, even though it’s quite a bit more assured in terms of budget and direction.  This time, the action moves south to Florida for spring break, but the script becomes dumber in a hurry.  If the first film was silly, this one is just stupid, and you can tell by the amount of time characters act like their own caricatures rather than real characters.  None if it is meant to be taken seriously, but the laziness of the script is such that even lame gags (like a metal detector finding a buried… metal detector) look like genius among the rest.  Much of the first half of the film is spent re-hashing the best moments of the first film, and while it’s fun to see Robert Carradine and friends laughing it up and James Cromwell return briefly as an unrepentant elder nerd, that’s not quite enough to make up for the rest of the picture.  There is, at least, enough colourful mid-eighties fashion to look at whenever the rest of Revenge of the Nerds 2 fails.  The DVD contains no special features of note.