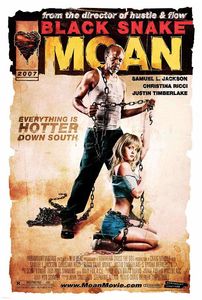 (On DVD, April 2011) The marketing of this film scream southern exploitation, but the end result is more concerned with blues music and moral redemption than it is about tough-love cures for nymphomania.  Samuel L. Jackson turns in an impressive performance as a retired-bluesman gentleman farmer who sees himself obligated to reform a deeply troubled girl who ends up in his front yard.  (Christina Ricci, with a performance that’s both convincing and topless.) The surprise of the film however, is to see to what degree it manages to incorporate music as a guiding theme: Jackson himself is credible as a bluesman, and the soundtrack of the film holds up by itself.  But that’s not as much of a surprise when considering that Black Snake Moan (titled from a classic blues number) is written and directed by Craig Brewer, whose previous film was Hustle & Flow: The two films share a number of similarities going beyond southern atmosphere and setting, to disgraced protagonists finding redemption in music.  While Black Snake Moan doesn’t have many surprises and seems to move just a bit too slowly at times, it’s a success in presenting unusual characters in desperate situations and making us care for them.  Jackson is a force of nature in this film, and the nature of the character lets him show a little bit more of his range than usual.  The film isn’t nearly as offensive as the marketing would let you believe, and even if it cuts dramatic corners once in a while (the ending is a bit weak), it does feel a bit deeper than its first few minutes would suggest.  A few tonal adjustments may have helped make it a bit easier to consider… but would it have destroyed the film’s voice?  The DVD’s supplements (a few documentaries and an engaging commentary by director Brewer) lay to rest some of those questions as they explain the film’s origins in the director’s panic attacks, the weaving of musical and religious themes, as well as the advantages of shooting a film “at home” near Memphis.