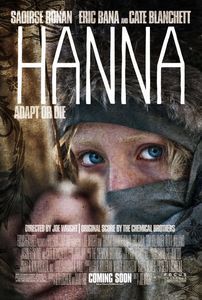 (In theaters, April 2011) Strange things happen when dramatic directors take on genre filmmaking, not the least being unique takes on genre conventions.  Joe Wright is best known for Oscar-baiting dramas such as Atonement and Pride and Prejudice, so to see him take on the tale of a teenage assassin facing down rogue CIA operatives is a bit of a stretch.  The end result is definitely unconventional, as Wright tries to reconcile mainstream dramatic techniques with the demands of a genre thriller.  Some of the result works well: Wright wisely eschews frantic editing, and one of the film’s highlight is a continuous shot that brilliantly depicts a fight between a character and four antagonists.  The film makes effective use of a creepy abandoned park for its climax, and Saoirse Ronan is very good in the title role.  Unfortunately, viewers will have to be patient in-between the film’s rewards: Hanna’s pacing is lethargic, deadened by failed attempts at comic relief (never mind Hanna’s “fish out of water” subplot: I kept hoping for the irritating family of tourists to be terminated with extreme prejudice) and sunk by its own self-importance: The plot is slight, simple and inconsequential enough to be silly, except that Wright seems convinced that he’s telling An Important Story.  The film splats when it should zip along, and seems to call attention to its own cleverness: not bad as an experiment, but not much of a success as a stand-alone thriller.  Much like The Chemical Brother’s unusual score, Hanna is different and sometimes intriguing for what it brings to the standard thriller formula, but it never feels as compelling as straight-up genre entertainment.