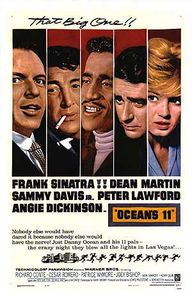 (On DVD, April 2011) Remakes should seek to improve on their originals, and the best way to do that is to remake something that failed to fully deliver on its promises.  So it is that if the 2001 remake Ocean’s Eleven is quite a bit better than its original 1960 incarnation, it’s in no small part due to how flawed the first film was.  The idea of robbing several Las Vegas casinos at once is good, but the limits of circa-1960 filmmaking and the indulgences of the film’s production combine to ensure that the film never fully takes off.  Part of the problem is seeing a fifty-year-old film: expectations have risen dramatically in expecting a film to reflect reality, and watching Ocean’s 11 now is a reminder about soundstage filming, languid pacing, unconvincing blocking and non-naturalistic dialogue: The film feels fake even without getting into the very different reality of 1960. Never mind the fashions: how about the casual racism and sexism?  Adding to the film’s very distinctive nature is the nature of the production itself, mixing musical numbers with then-celebrity cameos, often to puzzling effect such as when Shirley MacClaine stops the film cold for two minutes’ worth of drunken lushness, or when Sammy Davis Jr. allows himself a tune or two.  Still, even a flawed Ocean’s 11 is worth watching: “E-O-Eleven” sticks in mind, the time-warp effect is fascinating (from 1960, keep in mind that World War Two was less than fifteen years distant –shorter than the Gulf War is to 2011), the coolness of the characters still works and if the film itself feels artificial and interminable, some individual moments stand out.  The remake is sufficiently different (and better) that it doesn’t spoil the original.  The “Danny Ocean box-set” DVD comes with a welcome assortment of extra features, including an audio commentary.