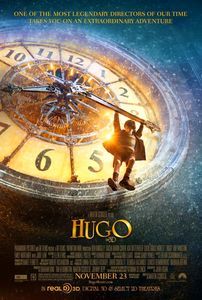 (On-demand video, March 2012) Watching Hugo became mandatory after its five-Oscar performance at the 84th Academy Awards, but such success was predictable given that Hugo is a movie celebrating movies; Hollywood loves patting itself on the back (as further proved by the night’s other big winner, the silent-film homage The Artist) and Hugo is less about its plot that it is about seeing Martin Scorsese deliver a paean to the beginning of the film industry and, in the same breath, the tradition perpetuated by Hollywood. Which isn’t to say that Hugo is overrated: As a flight of fancy honoring Georges Meliès and the beginning of film-making as a dream factory, it’s perfectly-controlled, lavishly produced and almost heartfelt.  It tells an enchanting story and does so with the best and latest feats of technical wizardry.  Even seen in two-dimensions, Hugo benefits from having been shot in 3D: The opening half-hour, in particular, shows a Cameronian understanding of how to move a camera through space, creating a depth to the film that will delight anyone interested in great cinematography.  The special effects are used wisely, and 1931 Paris comes alive in a way that somehow feels different from any of the many versions of the city seen on film so far.  Hugo doesn’t avoid feeling a bit long, especially toward the end, and wallows in its own sentimentality, but the result is still a film that combines emotion and technology in efficient fashion.  Ben Kingsley is remarkable, and the film allows itself a few moments that, while not strictly necessary, show how much wonder you can create with a big budget and decent craftsmen.  The 2011 epitome of Hollywood at its most lavish, Hugo will speak most clearly to cinephiles willing to embrace “the magic of movies”.