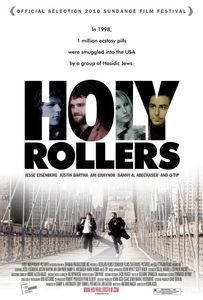 (On-demand video, April 2012) There really isn’t anything startlingly original about the dramatic arc of Holy Rollers: You can probably recall a bunch of other “good kid gets involved in drug-dealing, realizes how terrible it is and gets out” movies out there and this one doesn’t structure itself any differently.  What is new here, however, is the context: We seldom see films about the Hassidic Jewish community, and melding the usual kid-becoming-criminal plot template in this environment (it’s based on a true story) is interesting in itself even despite the lack of surprises in where it’s going.  (Actually, the biggest surprise here is that Holy Roller isn’t really interested in criticizing the Hassidic lifestyle.  This may end up being a problem for some viewers as the film tries to show the protagonist both getting away and yet returning to the faith-based lifestyle.) Much of the cinematography aims for drab realism: This is the kind of low-budget film that looks as if it was shot on a low budget, murky colors, shaky handheld camera and accidental shot composition are all on-screen. Acting-wise, Jesse Eisenberg doesn’t stretch far in a very familiar role for him, but he’s as fine as the rest of the cast in giving life to the rest of the story.  Otherwise, Holy Roller is a straight-up dramatic film: it’s good enough at what it does, doesn’t reach out of its comfort zone and doesn’t leave any strong feelings one way or another.  It exists and it’s relatively successful at what it does.