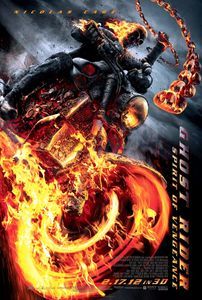 (On Cable TV, October 2012) I’m intrigued by directing team Neveldine/Taylor’s high-energy, high-risk, quasi-experimental approach to their films.  At their best, they can score big laughs and deliver memorable moments.  At their worst, though… it’s all juvenile nonsense and headache-inducing jump-cuts for ninety straight minutes.  While Ghost Rider: Spirit of Vengeance is noticeably more entertaining that the first limp 2008 incarnation of the character, it’s still not very good –although in a different way.  There’s no doubt that Neveldine/Taylor are making an action film here, and that they have tried to re-tool the Ghost character in a far more dynamic fashion.  The ever-entertaining Nicolas Cage seems game to play along, mugging for the camera even when CGIed to a flaming skull.  Some of the action sequences have pep to them, although they remain best described than seen.  It’s very cool to imagine Ghost Rider taking control of a massive excavator or fighting an opponent on top vehicles rushing down a deserted highway.  Unfortunately, it’s not quite as cool to see the flurry of disconnected images that end up presenting the final events.  Neverldine/Taylor have good visual imaginations and an amusing self-awareness, but they need to learn some discipline in order to make their better moments shine.  As it is, Ghost Rider: Spirit of Vengeance feels like a barely-digested blend of good and bad.  The humor works from time to time, some of the Romania/Turkey scenery is nice, the action beats have potential; the decaying villains are more interesting than usual… but it doesn’t work together nearly as well as it should.  For all of the competent actors assembled here (Ciarán Hinds! Christopher Lambert! Idris Elba!) and the distinctiveness of Neveldine/Taylor’s direction, we’re left with a montage reel of interesting things rather than a movie worth watching from beginning to end.