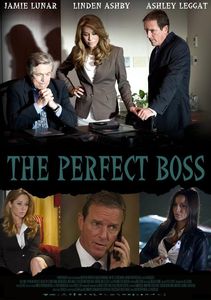 (On Cable TV, July 2013) Ever the optimist, I keep watching made-for-TV movies in the hopes that some of them will be better than the usual dreck that goes for those kinds of films.  The Perfect Boss certainly won’t do much to raise my future hopes: While the premise suggests an interesting antagonist in the person of a high-powered psychopathic female executive, the sad reality of the film doesn’t live up to even modest expectations: Jamie Luner is a complete dud as the antagonist, her face seemingly unable to move above the eyes, and the rest of her performance barely being more expressive.  The title of the film barely makes sense, as the conflict between the antagonist and the young-woman protagonist who pieces together her involvement in her father’s death doesn’t even allow the two to be in direct contact.  The script occasionally manages a few clever moments, but much of it is stock material out of anti-pharma diatribes and sociopath case studies.  The one kernel of interest that the film has for Ottawa-area viewers is that the film was shot at a number of locations around the city: Savvy viewers will spot a Vanier street, MacArthur Bowling, Tea Party and the conference area of Casino Lac Leamy.  Unfortunately, this really isn’t enough to make The Perfect Boss particularly compelling: while it’s not abysmally bad, it’s no really good either, and there are plenty of other, better thrillers out there.