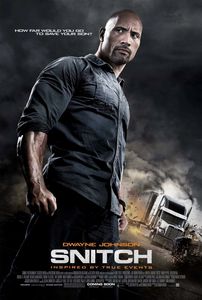 (On Cable TV, March 2014) It’s interesting to see a performer like Dwayne Johnson slowly move away from straight-up action roles to more nuanced dramatic work. For a so-called action star, his charisma has long been off-the-scale, and his noteworthy performances have always gone beyond simply being a big guy handling big guns (or swords, or cars, or…) So it is that Snitch is a bit of a departure: a character-driven crime drama with a socially-conscious intent and little by way of outright action. Here, Johnson plays the hard-working father of a young man taken to prison after a relatively minor mistake. Forced to go undercover in the drug trade in order to free his son from prison, Johnston’s protagonist is drawn deeper and deeper in the underworld, forced to desperate actions. There’s a bit of social critique of the American judicial system, there’s a bit of family drama, there’s a bit about an honest entrepreneur working for dangerous mobsters, and there’s a final bit of guns-and-trucks action toward the end. For the most part, though, this is a small-scale crime drama with a likable protagonist stuck between two unsympathetic worlds, and how he tries to survive that forced descent in the name of family redemption. Snitch is not a big movie, and that requires the right expectations going into the film. While it’s a decent crime drama that evoke a throwback to past decades, it’s not much of a thriller when measured against the overblown action films with which Johnson has been associated throughout most of his career. Snitch may disappear quickly from public consciousness, but it’s a worthy showcase for Johnson to prove that he can do much more than be a hulking action hero.