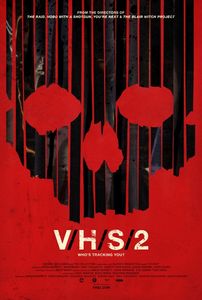 (On Cable TV, April 2014) Once again, this anthology horror film defies the odds: I didn’t expect the first V/H/S to be any good (Found-footage anthology? Ugh!) but it was, and I didn’t expect the second one to be better, but it is. It sure sounds as if the directors of this sequel listened to the reviews of the first film, which identified two specific segments as being far more dynamic and interesting than the rest. As a result, a good chunk of V/H/S/2 is played at the same level of frantic manic energy as the best segments of the first film, and the result is a big thrill ride that overcomes the clichéd “And they all die at the end” trope of found-footage films. Even the framing story works a bit better this time around: “Tape 49” features two Private Investigators who get into a lot more trouble than they expected when they’re asked to retrieve a mysterious tape. The setup is identical to the first film, but the two characters are more sympathetic than the prequel’s sociopathic hoodlums, and the end horror fillip is quite a bit more successful. As a bonus, we get hints of a wider conspiracy, setting up future installments should the franchise want to move forward. The first segment, “Phase I Clinical Trials” features an ingenious rationale for the first-person perspective (a man gets an artificial eye, starts seeing ghosts) but the good setup and effective first scares eventually degenerate into big noisy nihilistic nonsense by the end of the segment (a weakness shared by most of the other pieces of the anthology), nullifying somewhat the first promising moments. What’s most to like about the VHS series so far is the way the short-film format allows stylistic explorations of one-note premises that would be impossible to sustain over longer films, and “A Ride in the Park” is a near-perfect example of such, featuring a first-person perspective of a zombie outbreak. While the film doesn’t put us inside the mind of a zombie, it puts us slightly above it, and shows that even stale subgenres can be explored from new perspectives. (Fittingly, it’s a segment co-directed by some of the same people who did The Blair Witch Project.) Compared to its predecessor, V/H/S/2 wisely chooses fewer longer segments (4 rather than 5) and “Safe Haven”, the strongest section of the film, cleverly uses up its time to set up an atmosphere of pure dread as journalists investigate a sinister cult, before unspooling everything in ten solid minutes of pure craziness. Again, the scares don’t cohere into a satisfying conclusion, but the apocalyptic succession of horrors is a high-energy race to the final disturbing images, and directors Timo Tjahjanto and Gareth Evans (the mad mastermind behind “The Raid” series) have much to be proud of. After that, “Slumber Party Alien Abduction” feels like a bit of a let-down, even if it uses the conceit of alien abduction for a frantic succession of hopeless chases, bright flashes and loud noises. (No, but seriously: the sound design is excellent in this segment.) Much of V/H/S/2 has the usual problems of found-footage films: poor image quality, headache-inducing direction and they-all-die endings. But the film does well within the confines of the form and manages to create a dreadful atmosphere that escapes slicker productions. It’s a step up from the first film (mostly by being as much fun as it is horrific, and having far more sympathetic protagonists), so much so that I’m definitely interested in seeing an eventual V/H/S/3.