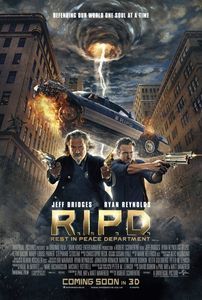 (On Cable TV, August 2014) Poor Ryan Reynolds.  He’s a very likable actor with a string of good performances in smaller movies (Waiting, Adventureland, Buried, Safe House) but who seems unable to get a role in a high-budget franchise film good enough to make him a superstar.  Blade 3, Wolverine, Green Lantern and now R.I.P.D.: he just can’t catch a break.  His latest effort is clumsier than most: While R.I.P.D.‘s “undead policemen” premise almost self-consciously attempts to ape high-concept SF comedy such as Men in Black, it never manages to transform a few interesting images into anything close to the potential of its premise.  The first act has some potential and amply demonstrates that it’s a big-budget production.  Afterwards, though, it seems to become steadily less ambitious and increasingly inept at what it does attempt: The hunt-the-deados rationale lacks urgency compared to the entire “undead policemen” premise, while the overarching plot about a magical artifact seems far too rote to be interesting.  It really doesn’t help that the film’s sense of humor is so… odd.  Not bad, just odd in ways that seem more bizarre than amusing.  (Often, you can tell that someone thought a details would be funny, even though it’s not, in itself, funny.)  Many of the script’s conceptual laughs fall flat on-screen –which may simply betray sub-par directing and deficient special effects more than anything else: the idea of “mismatched avatars”, for instance, is cause for more frustration than laughs when it’s used so inconsistently.  But the more questions you ask about this film, the more frustrated you’ll get.  (Never mind the uncomfortable theological questions raised by the premise, then wilfully ignored by the rest of the film.)  The few bright spots include a few early special-effects sequences, Reynold’s aw-sucks performance and a relatively good turn by Jeff Bridges who seems to be reprising his True Grit frontier-lawman persona with panache.  R.I.P.D. remarkably degenerates the longer it goes on, suggesting that it, too, is a dead film that doesn’t quite understand how not-alive it is.  Hopefully Ryan Reynolds will take notice of the parallels with his career before it’s too late.