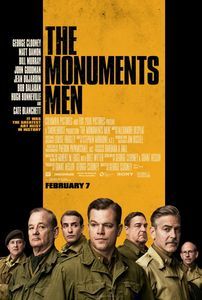 (On Cable TV, October 2014) As much as I like the topic of The Monuments Men, as much as I find its actors likable, as much as I appreciate the attempt to deliver an old-school WW2 drama that eschews action theatrics in favor of more subtle motivations (all the way to “does saving art justify personal sacrifice?”), I don’t think that this film is as good as it could have been.  It’s hard, of course, to condense a real-world story as big as the Monuments, Fine Arts, and Archives program into a short entertaining piece of Hollywood cinema, but The Monuments Men often takes shortcuts that ring false, and remains sedate when it should be a bit more energetic.  This is writer/director/star George Clooney’s movie, and so a bit of the blame should go to him: his genial, middle-of-the-road approach to the material ends up feeling unfocused and dull.  The script has no choice than to go to episodic scenes, but many of them simply lead nowhere and don’t build upon each other.  The comedy clashes against the drama rather than support it, and it’s hard to say whether this should have been better as a snappy 90-minutes thriller or as a longer TV miniseries.  The Monuments Men does build some narrative tension late in the proceedings, but much of its first half is one-thing-after-another episodes with stock characters and familiar situations.  But while the film may not best attain its own noble ambitions, there’s something quaintly charming, even comforting about the way it is put together: Big-name movie stars, classical direction, clean cinematography and straightforward plotting.  The film wears its idealistic convictions right where everyone can see them, and makes little attempt to humanize its enemies.  (The best scene even climaxes with a sarcastic “Heil Hitler!”)  And then there are the actors, from Clooney indulging into his familiar old-school movie star charisma, to Matt Damon once again being a good sport (trust me: his French in the film truly is atrocious, but not in ways that can be blamed on Montréal), Bill Murray warping time and space through sheer coolness, and a lengthy list of known names all playing along.  The Monuments Men ends up in that vexing netherworld where it can be both disappointing yet entertaining at the same time, a comfort film that feels a bit too long and disjointed for its own sake.