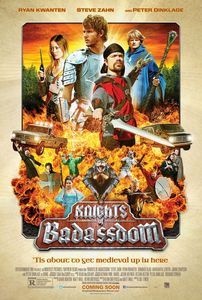 (On Cable TV, November 2014) The good thing about low-budget filmmaking is the freedom it offers to explore oddball niche topics.  So it is that Knights of Badassdom is all about a sub-segment of geekdom so geeky that even other geeks often dismiss it – Live-Action Role Playing, or LARPing for short.  This film is about such an event, where people dress up as fantasy characters and go hiking around the woods for a few days in an attempt to recreate the spirit of their favorite fantasy games/books/movies.  Here, of course, things are complicated when a spell goes wrong and brings back a succubus into the real world.  As bodies pile up, our heroes have to figure out how to vanquish their foe, and how to do so when surrounded by people convinced that it’s just another wrinkle in the game.  Seemingly designed for the Comic-con crowd, Knights of Badassdom takes a few TV fan favorites (Peter Dinklage, Summer Glau, Ryan Kwanten, etc) and thrown them in the middle of a script sweetened with geeky inside jokes.  To the film’s credit, much of it actually works: While the film is hampered by a small budget, it does actually understand what it’s trying to do, and delivers a few chuckles along the way.  It’s too bad that the film suffers a bit from procedural blandness: in trying to combined comedy with horror, Knights of Badassdom often ends up with a compromise that won’t truly please anyone.  Still, it’s a bit of a wonder to see such a niche film makes its way to cable TV, and remains accessible to people without much of an interest in the subject matter (the sequence where fight scoring is explained, with some visual aid to highlight the hits, is a good example of making the material more accessible.)  It may not be much of a film, but it’s true to its goals and remains reasonably entertaining throughout.