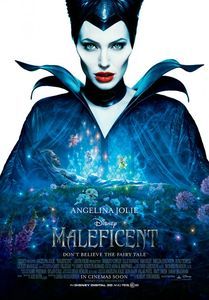 (Video on Demand, November 2014) There have been many, many film transforming classical fairy tales into fully-fledged fantasy epics lately, and it’s in that context that Maleficent scores higher-than-average satisfaction as a modern retelling of Disney’s animated “Sleeping Beauty” through the antagonist’s eyes.  Of course, this is a rehabilitation rather than a subversion: This Maleficent is traumatized by past wrongs, outclassed by a greater evil and proves herself worthy of admiration through a lengthy rehabilitation period during which she does much good.  So it goes, with added feminist parables to make it even more interesting to today’s audiences.  Not much of the story is a surprise once the rehabilitation aspect becomes clear, but it’s executed competently, and Angelina Jolie gets a terrific role befitting her A-list celebrity as the titular character.  What’s more interesting is how pretty Maleficent is: papered almost wall-to-wall with computer-assisted imagery, this is an often-gorgeous fantasy film in which we get more than the ugly monsters and clashing armies so often seen from other fantasy epics.  (We do get the clashing-armies shot, but at the beginning of the film, and so liberated move on to something else.)  While the film is often by-the-numbers, it does have a bit of charm and interest.  Still, be warned: With the body violation subtext running so deeply into the villain-turned heroine’s motivation, this really isn’t a movie for little girls.  For adults, though, Maleficent is something more unusual, and far more interesting than another of those “fairy-tale turned into fantasy epic” movies we’ve seen so often lately.