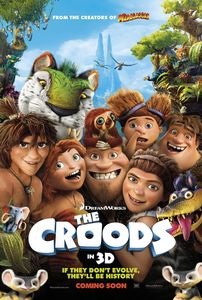 (On DVD, February 2015)  Dreamworks Animation has always been a bit of a hit-and-miss studio: some of their films are remarkable, while others are instantly forgettable.  The Croods falls somewhere in the middle, its uneven humor bolstered by inspired moments of lunacy but dragged on by an over-eagerness to stuff sentimentalism in a film that doesn’t need it.  As a premise, the idea of following a prehistoric family as their learn modernity and escape a continent crumbling into pieces isn’t too bad: the anachronisms are part of the fun, and the setting offers a lot of colorful possibilities.  Nicolas Cage and Emma Stone deliver standout vocal performances, but it’s really the animation that’s worth seeing, with fantastical creatures and dynamic camera moves working to deliver something interesting.  Some sequences work well, usually when the film stops worrying so much about sentiments and an overused plot structure: The Croods is best in absurdist humor and fast-paced montages.  It’s when it keeps harping on its basic themes that the film slows down to a crawl and gets annoying.  Still, the film does have themes and emotions, which is more than could be said of other films in the Dreamworks Animation filmography.  The Croods is watchable enough, and works even better as a family film.