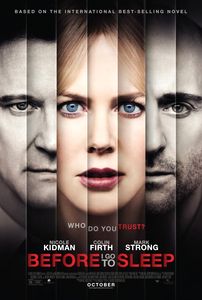 (Video on Demand, March 2015) I have a bit of a fondness for films in which exotic afflictions are used for thrilling effect.  (See; Faces in the Crowd; Memento)  Before I Go to Sleep starts by describing the plight of a woman who loses her memory every night, only remembering events from long-ago.  Every morning, she reads notes to orient herself; every morning, her husband reassures her; every morning, she discovers who she was.  But, of course, some clues accumulate suggesting that what she is told to remember isn’t what really happened to her… and the thrills begin.  Who is her husband?  Does she have a son?  Is the doctor she’s seeing without her husband’s knowledge there to help or hurt her?  So many questions to be answered during a delirious third act!  Nicole Kidman isn’t bad as the protagonist and Mark Strong is his usual menacing self, but it’s Colin Firth who turns in the most remarkable performance with a somewhat unusual turn for him.  Rowan Joffé’s direction has a few stylish moments and if the story is wild enough to compensate for odd turns of logic, the film does suffer from a bit of a middle-third lull and some late-movie clichés.  Still, given that Before I Go to Sleep had a fairly low profile in North America, it’s most likely going to be a pleasant surprise for fans of the two lead actors, and offer a reasonably competent late-night thriller for audiences with low expectations.