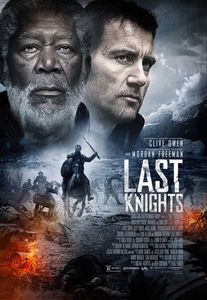 (Video on Demand, April 2015)  For a film that disappeared without traces from North American theaters, Last Knights has pretty good production values, and is almost interesting enough to stand on its own as something more than another take on the “47 Ronin” legend.  There’s a bit of a spark in the premise, which posits (I think) a future-medieval society that avoids historical precedent while allowing for an appealing multi-racial cast and new iconography.  Unfortunately, they don’t do anything with that idea other than justify the pseudo-medieval setting (no ancient artifacts, no mixture of technologies and customs, no bearings on the plot).  There are a few twists and turns in the first act, at least until the 47 Ronin parallels become obvious.  After that, it’s an assault-the-fortress caper film with a too-long coda.  Clive Owen is instantly credible as the protagonist, while Morgan Freeman has a decent turn as his commander.  Less happily, the film struggles to become more than just another generic fantasy vehicle: the action is shot blandly and with far too many quick cuts, whereas the color palette of the cinematography is often limited to the point of dullness.  There isn’t much here to excite or astonish, and so while Last Knights avoid the worst pitfalls of what could have been a Direct-to-Video effort, there isn’t much here to make it memorable.