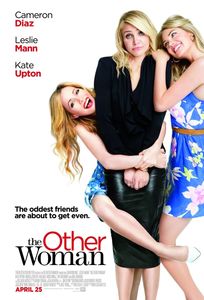 (On Cable TV, April 2015)  Revenge fantasies may not be good for the soul, but they can certainly drive a comic film.  Here, two (and then three) women are united when they discover that they’re being cheated upon by the same man, who also turns out to be a con artist in other ways.  Cameron Diaz is dependably amusing as the lead, whereas Leslie Mann becomes a delightful foil as the most mercurial of them—she has the shrieking madwoman thing down to a science.  Nikolaj Coster-Waldau, in another striking big-screen role, does have the requisite mixture of charm and sliminess as a philandering fraudster.  Other additions to the cast aren’t as memorable: Despite prominent billing, Kate Upton is a bit bland as the Third Woman, whereas I remain unimpressed by Nicki Minaj’s performance in her short scenes (and this despite unexplainably liking Minaj as a musical performer).  It’s a cheap and fast comedy without much sophistication, but it does get the chuckles it’s aiming for.  There are a few false notes along the way (the ending is a bit more bloodily cruel than I had expected) and the script doesn’t embarrass itself with unpredictable plotting, but The Other Woman pretty much hits its target and delivers unchallenging entertainment for a solid 90 minutes.