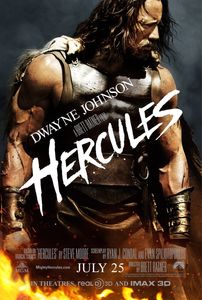 (On Cable TV, May 2015) I don’t quite understand this trend of demystifying legends, offering “the real story” behind fantastical tales or sucking all the fun and excitement out of time-proven tales.  Hercules hops on this bandwagon (see Robin Hood, Exodus, etc.) by telling audiences about the Hercules behind the legend, presenting a mercenary who’s only too happy to let the legend of his twelve labours get him hired by rich clients.  What follows is a historical epic absent of magic, almost bending itself out of shape to deliver epic battles without tipping into the supernatural.  It doesn’t always work, as a not-really-zombies sequence shows.  Still, the film coasts a long time on Brett Ratner’s unobtrusive direction and Dwayne Johnson’s pure charisma.  As often happens, Johnson is fantastic even if the film around him isn’t: playing a mortal-but-extraordinary Hercules is the kind of thing that only Johnson can do in today’s action star pantheon.  Otherwise, Hercules seems almost happy to undercut even its own claims to spectacle, and its bare-bones structure is so predictable that it leaves almost nothing to gnaw upon.  So it ends up as a serviceable, but hardly memorable historical action film.