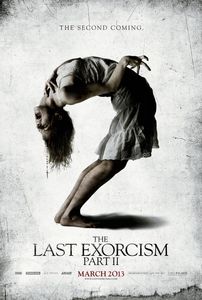 (On Cable TV, June 2015)  There’s not a whole lot to say about wholly-unmemorable The Last Exorcism Part II: While the original has an unexpected small kick to it, this sequel seems determined to be as dull as possible.  Thankfully gone is the found-footage motif, but also gone are the dramatic ironies of the previous film’s skeptic rediscovering faith, or any kind of thematic depth whatsoever.  Ashley Bell acquits herself honorably in her role, but there’s simply not much there for her to do: Much of the film is unimaginatively executed according to horror-film formula (and not the good formula either).  The moment-to-moment scares are ineffective, the film doesn’t quite know what to do with its New Orleans setting, the conclusion is one we’ve seen countless times before… In other words, The Last Exorcism Part II is exactly the kind of cheap horror sequel that give a bad name to cheap horror sequels.  The film’s sole saving grace is that it’s simply dull, rather than offensive or irritating.  On the other hand, it means that it’s hard to find anything to say about a film so devoid of any substance.  Fortunately, it’s redundant to tell everyone to forget about The Last Exorcism Part II – it only takes a few minutes for any lasting impressions of the film to disappear on their own.